Joe Bravo was born in San Jose, California. His father was from the state of Michoacan, Mexico and his mother's family is from Mexicali, Baja California.

Growing up in the border town of Calexico, California, Joe began his art career making mud figures, drawing, constructing wood swords, slingshots and other projects. The lack of having any store bought toys helped Bravo to develop his creativity and technical ability because he had to use his imagination to make his own toys.

Bravo graduated from California State University, Northridge with a Bachelor of Arts degree in Graphic Design and studied art for one summer in Mexico City at the Taller de Arte Grafica Popular.

Joe had a long career working as an Art Director and Graphic Designer for several ad agencies, corporations and publications.

He also painted murals for the City of the Los Angeles, SPARC, and AT&T.; Joe is the proud father of two adult sons and two grandsons.

“I use the Tortilla as a canvas because it is an integral part of the Latino Culture and my heritage." 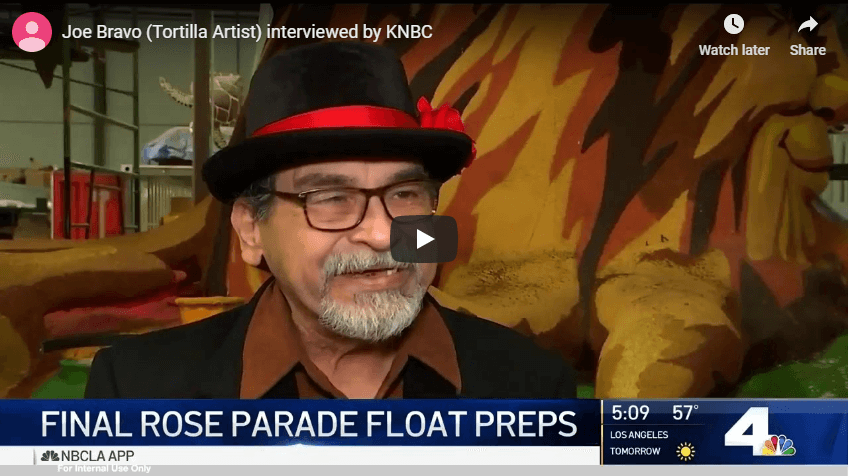 Bravo rides in the 2020 Rose Parade as a Cancer Survivor

Joe rode on the City of Hope float as a cancer survivor in the Pasadena Rose Parade on January 1, 2020. Bravo was interviewed by KNBC Channel 4 before he rode with nine other cancer survivors down Colorado Boulevard. The theme of the parade was "The Power of Hope".

Ripley's Believe IT or Not

Joe Bravo’s artwork was published in Ripley's Believe IT or Not! high-quality, coffee table book, “Prepare to be Shocked!” in August 2008. Joe was featured in a 2-page spread (pg. 150-151) in the book that also includes strange but true people, weird happenings, oddities of quirk and nature as well as interesting and bizarre feats. His art was well received and two more of his tortilla paintings will appear in Ripley’s Believe It or Not! Special Edition to be released in 2010. You'll also find The Bravo Code For Tortilla Painting included.

Find it on Amazon

Exhibit: "Bravo! The Tortilla Paintings of Joe Bravo" Kimball Art Center Feb 2-Mar 30, 2008 – Joe exhibited 40 tortilla paintings in Park City, Utah following the Sundance Film Festival. There was a huge turnout for his reception on March 8 as well as throughout the run of the exhibit. "It was kind of fun to give them an angle," Thomas said. "Students got to learn a little bit about art and were inspired to investigate what is Latino and Latino culture."

Booth, William. "An Artist In Flour" Washington Post 4 Aug. 2007– Joe was interviewed by the Washington Post and published on Saturday, August 4, 2007. The article was written from a tongue-in-cheek perspective by staff writer William Booth. "We see a tortilla and we think, yum, burrito night. But not Joe Bravo. No, mis amigos, Bravo looks at a toasted tortilla and he sees the Virgin of Guadalupe."

KGB Studio & Gallery– Bravo’s exhibition which ran from October thru December 2007, included Chinese-inspired paintings from his 2007 Hong Kong exhibition plus a tortilla headdress and costume adorned with kernels of corn from Farmlab’s “Not a Cornfield” project. A Day of the Dead community altar displayed his “Juarez Porque?” painting to honor the women of Juarez.

Hong Kong New Town Plaza – Joe Bravo’s exhibition in Hong Kong was a tremendous success with thousands of people viewing his tortilla paintings at the entrance arena of the New Town Plaza Shopping Centre. While the exhibit ran from August 11–24, Joe demonstrated his painting technique for five days. He also did a portrait of Kate Tsui, Miss Hong Kong 2004 and a Chinese TV actress at a press conference.

Hispanic Magazine - Joe and several of his tortilla paintings were featured in the September 2007 issue.

KTLA Morning Show– Joe was interviewed live by Gayle Anderson for the L.A. morning news program on KTLA Channel 5, on Tuesday, April 3, 2007 at the Mexican Cultural Institute on Olvera Street.

Tyra Banks TV Show – Bravo’s appearance on the Tyra Banks television show was repeatedly broadcast throughout the month of May, 2007. Joe presented his tortilla portraits of Tyra and Hillary Duff to them after conducting a tortilla painting workshop before a live studio audience.

One– Joe Bravo’s interview by Agustin Gurza appeared on the front page of the L.A. Times Calendar section on Monday, March 26, 2007. The article titled, “May Lead to Craving” gave a good overview of Bravo’s art background and history of his tortilla artwork. Several peoples’ impressions were also recorded concerning Joe’s art exhibit at the Mexican Cultural Institute.

KCRW– Joe was interviewed by Evan Kleiman on L.A. radio station KCRW’s Good Food program on Saturday, March 24, 2007 at 11:00 a.m. where he talked about his tortilla art.

Gastronomica – Bravo’s tortilla painting, “Besos y Balas”, was featured in the Spring 2007 national issue of Gastronomica: The Journal of Food and Culture.

Food Network– Joe’s tortilla artwork was nominated for a Food Network Award in the category “Play With Your Food: Artwork With an Edible Twist”. Bravo walked the red carpet at the awards ceremony on February 23rd in South Beach, Miami, Florida. The show aired nationally on the Food Network on April 15th, 2007.

Telemundo– Joe Bravo’s artwork appeared in the Telemundo youth program, “Nitido”, on Sunday, February 18, 2007 at 12:00 p.m., Channel 52. The pre-taped segment showed his artwork at the Mexican Cultural Institute and his tortilla preparation process in his studio.

Telemundo – Bravo was interviewed by Francisco Cuevas in his studio and at the Mexican Cultural Institute on his tortilla painting technique which aired on the Spanish news magazine, “Al Rojo Vivo”, on January 12, 2007.

SiTV– Joe did an interview on January 8, 2007 with SiTV’s Veronica Jacuinde at the Mexican Cultural Institute which will air on the program “On the Up”.

Pocho Hour of Power – The Friday evening before his Olvera Street opening at the Mexican Cultural Institute, Joe was interviewed on KPFK’s “Pocho Hour of Power” on his Tortilla Art exhibition and process by Lalo Alcaraz and co-hosts on November 17, 2006.

Los Angeles Times – Five of Bravo’s tortilla paintings accompanied by an article appeared in a quarter page section of the Sunday Calendar print edition as well as their website on November 26, 2006.

San Fernando Sun – Joe was featured on the front cover in both the English and Spanish sections. Several of his tortilla paintings were published and each section had a two page spread on January 11, 2007.

Downtown LA Life- Joe appeared on their internet home page during the month of December.

McDonald’s– Joe was contracted to be a spokesperson for McDonald’s new tortilla menu item, the Snack Wrap. He unveiled a portrait of Ronald McDonald at the 8-1-06 launch event at the 3rd Street Promenade in Santa Monica.

Triumph of Our Communities, Four Decades of Mexican American Art  - Some of Joe’s artworks (pages 258 and 281) in 2005. The 11"x14" colorful, coffee-table book depicts Latino artists and Latino arts organizations/galleries throughout the United States.

The Tate Galleryin London included Bravo’s Fridalupe tortilla painting in the catalogue for their Frida Kahlo exhibit, which ran from June thru October, 2005. The exhibition’s curator, Emma Dexter, used the artwork as a comparative illustration in her catalogue essay.